Since the Harmonync is a prototype not yet suitable for the production, i suggest you use it in studio rather than onstage.

Usually recording studio is synonymous with DAW. So, in this tutorial series we are going to explain how to retune MIDI instruments passing through Logic Pro. In particular, how to record and edit your performance. This is a bit more difficult than playing the Harmonync directly, without recording and playback.

I do not recommend to directly record the Harmonync MIDI output because you have pitchbend and channel informations that are not so easy to handle: you risk to make a mess by rearranging the Harmonync output!

Since actually there are no tutorial for other DAWs, reading about Logic can be useful to get the general guidelines of the required MIDI routing.

We will create three different templates, with which you can retune almost any types of instrument.

Start with the homepage of this site. In particular the “Quick start” section.

To follow this tutorial you need the following software installed on your system:

The required hardware may vary. It depends on your needs. To take advantage of the full potential of the Harmonync, you need at least a MIDI master keyboard with four octaves, or 49 keys, minimum.

You can retune both hardware and software instruments. Some instruments are better suited to be retuned than others. The distinctive features of each instrument will be discussed later.

Finally, you need a knowledge base about how the Harmonync and the MIDI protocol work:

It is more likely that you have a software rather than a physical instrument. For this reason, these first tutorials are about retuning a virtual instrument (also referred to as VI). In Logic Pro, the VIs are called “software instruments”.

The following diagrams give an overview of what we are going to do. 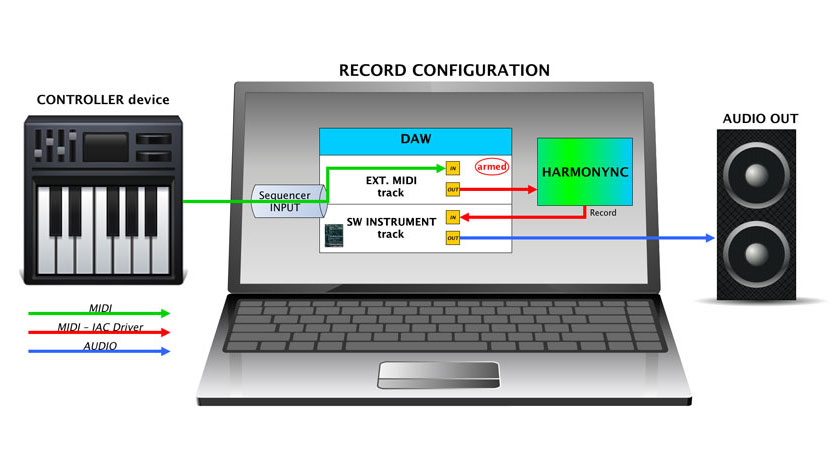 Purpose of this configuration is to record the original performance coming from the keyboard, hearing the retuned audio output from the instrument.

Now that we have recorded the notes on the normal MIDI track, we can rearrange our performance. When the changes are done, we can switch the configuration to Mixdown. 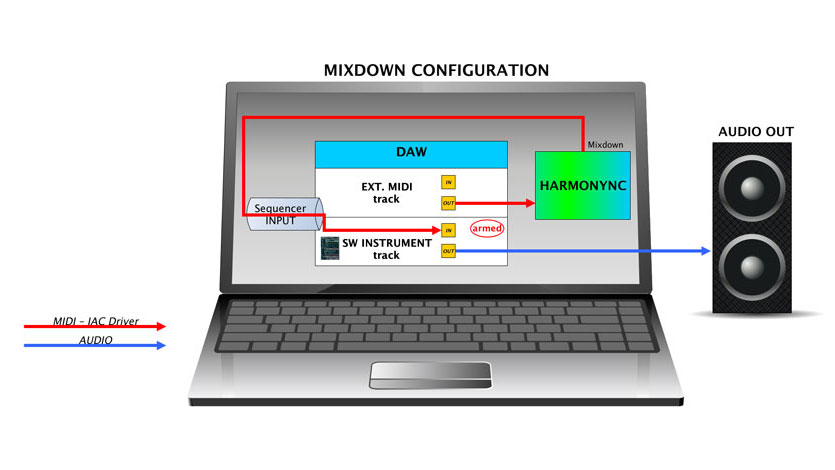 We recorded the notes from the keyboard at first. Now, we are going to record retuned notes coming from the Harmonync.

We might say that the mixdown is a sort of render of the original performance. In this way, the pitchbend messages and the channel informations will be recorded.

Now you can playback the retuned instrument without the Harmonync. In this way you can also use the Freeze feature of Logic to free up the CPU from this instrument and any effects it uses.

When you are in the Mixdown configuration you could generate an infinite MIDI loop if the external MIDI track is record-armed: 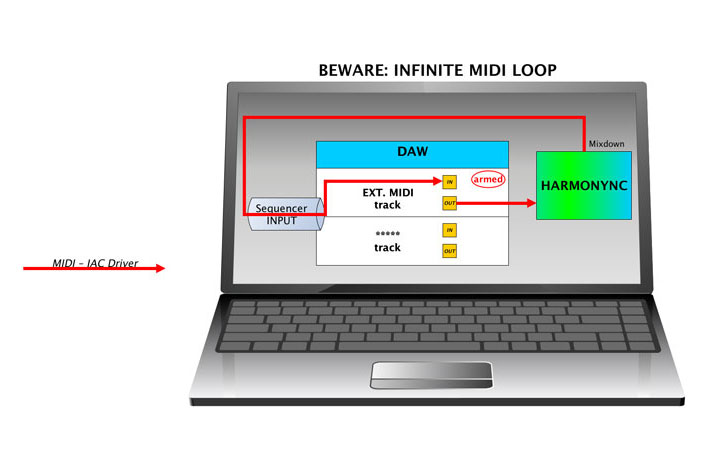 This can happen by starting the playback or pressing a key on the input keyboard/controller. Un-arm the MIDI track to stop the loop or switch to “Record” configuration.

Obviously you can also retune a physical instrument.

Furthermore, if the instrument has a keyboard and the Local Control OFF mode capability, you can play and retune the same machine.

As I said, these first tutorials are about retuning a virtual instrument. So we do not discuss these cases… for now.

Ok, now we are ready to start.

In order to connect the Harmonync to Logic Pro you need at least a MIDI port.

If you have a MIDI device with many I/O ports, you can physically wire the routing configuration we are going to see.

For convenience we will use the OS X’s native IAC bus drivers. With IAC drivers you can create as many virtual MIDI ports as you need, ready to connect your applications.

In the Finder search for “Audio MIDI Setup” application and launch it. It’s under /Applications/Utilities/.

To open the MIDI window you have to click “Show MIDI Windows” under the “Window” menu. 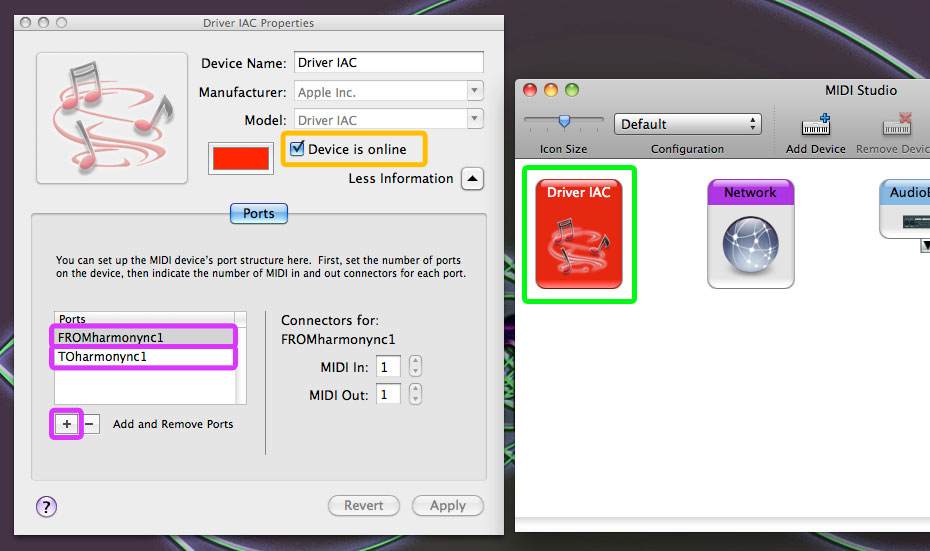 It will be opened the window “Driver IAC”.

Now we have two MIDI ports/buses: one brings the data FROM Harmonync to Logic and the other from Logic TO Harmonync.

We do not use a single port and its two (input and output) channels because it is more complex and it can generate data loops and misunderstandings. Why should we economize? It is virtual! 😉

It is not required that the Harmonync patch is loaded. Settings on Pure Data are saved globally as an application preference and not in the patches. 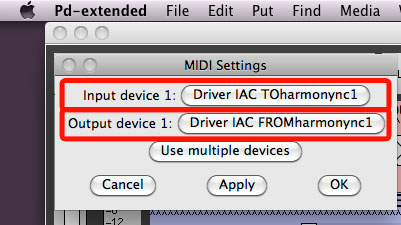 You just have to set input and output devices as shown in the previous figure.

Sometimes the MIDI port labels go to shit, but you just have to rely on the name: TOharm… and FROMharm…

Then click on [OK] to apply changes and close this window.

What follows is not obligatory but is highly recommended because the tuning process may be complex and it’s very easy to get a wrong tuning.

To test the tuning (and avoid wrong frequencies) could be useful a reference sound.

Also for this purpose, the Harmonync provides an internal DSP to generate simple sounds. Even if we’re going to generate the sound by a synthesizer or a sampler, the internal DSP is very useful as a diapason reference.

You can also check the tuning with polyphony to be sure that the channel-layers are received in the right way and the MIDI Channel Mode 4 (aka guitar mode) is correctly implemented on the instrument.

No matter where you want to output the DSP sound: it can be the same soundcard you are using with Logic (if this doesn’t cause problems) or another one. The important thing is that you can hear the two outputs together.

You have to set the output device as shown in the previous figure. We don’t need any input.

Then click on [OK] to apply changes and close this window.

To activate the DSP, just click on the checkbox as in the following figure.

When the instrument is well-tested, you can switch off the DSP.

Now you can read to the next step: Where to start?